For Immediate Release
May 24, 2022
Downtown Jackson Partners, community leaders ensure the celebration will go on
The charitable effort follows a majority vote from the City Council to defund fireworks celebration for Juneteenth, Fourth of July holidays
(Jackson, Miss.) – Today, the City of Jackson is excited to announce Downtown Jackson Partners, Dharma Professional Services and community leaders have stepped up to the plate to ensure there will be a  fireworks celebration for the Juneteenth holiday. DJP has promised to fund the $9,000 originally budgeted for the Juneteenth celebration.
The community effort recognizes the great importance these events mean to the City of Jackson, said Mayor Chokwe Antar Lumumba.
“I’m very happy to stand with these partners of Jackson who have recognized two treasured events in the City of Jackson were in jeopardy of not taking place,” he said. “So, I’d like to thank Downtown Jackson Partners, Dharma Professional Services, and several other community organizations for filling in the gap and making sure we can have a Juneteenth festival.”
DJP and Dharma, along with several community organizations, led the charge in securing funds. Another $2,000 has been raised so far for the Fourth of July.
Ison Harris, the City’s director of Parks and Recreation, also said he began efforts to secure funding shortly after the City Council vote.
“The community has spoken,” Harris said. “This is something we need to have. The goal is as the Capital City in a Bicentennial year we should have fireworks and we should have Fourth of July fireworks.”
Bishop Ronnie Crudup, also the chairman of DJP, said the nonprofit was pleased to step in and fill the gap.
“It really didn’t take much arm twisting at all to do this with the leadership of Executive Director John Gomez and on behalf of the board who was very pleased to support this event,” Crudup said. “For us, it’s all about the quality of life.”
The U.S. Congress established June 19, or Juneteenth, as a national holiday in 2021. The holiday commemorates the end of slavery in the United States. Community leaders said it was unacceptable for the celebration to be canceled – especially in a City so central to the Civil Rights movement and one with a close to 85 percent Black population.
The founder of Dharma Professional Services, Allan Cole said fireworks have always been a symbolic representation of freedom in America. He committed himself to make it happen for Jackson.
“Juneteenth represents freedom for the African American diaspora,” Cole said. “In fact, it is the American Black Passover because it represents freedom. And so fireworks must be a part of it… If we can come together and watch some firecrackers pop in the sky, and look at each other and smile, maybe we can find common ground on other things.”
Mayor Lumumba also touched on the theme of community engagement.
“I think it’s important to recognize the value of these events. These events are unifying events. Yes, we have challenges in the City, but it is events like this that allow us to gain a greater sense of community, a greater sense of unity,” he said. 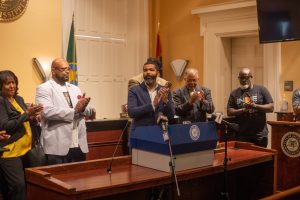