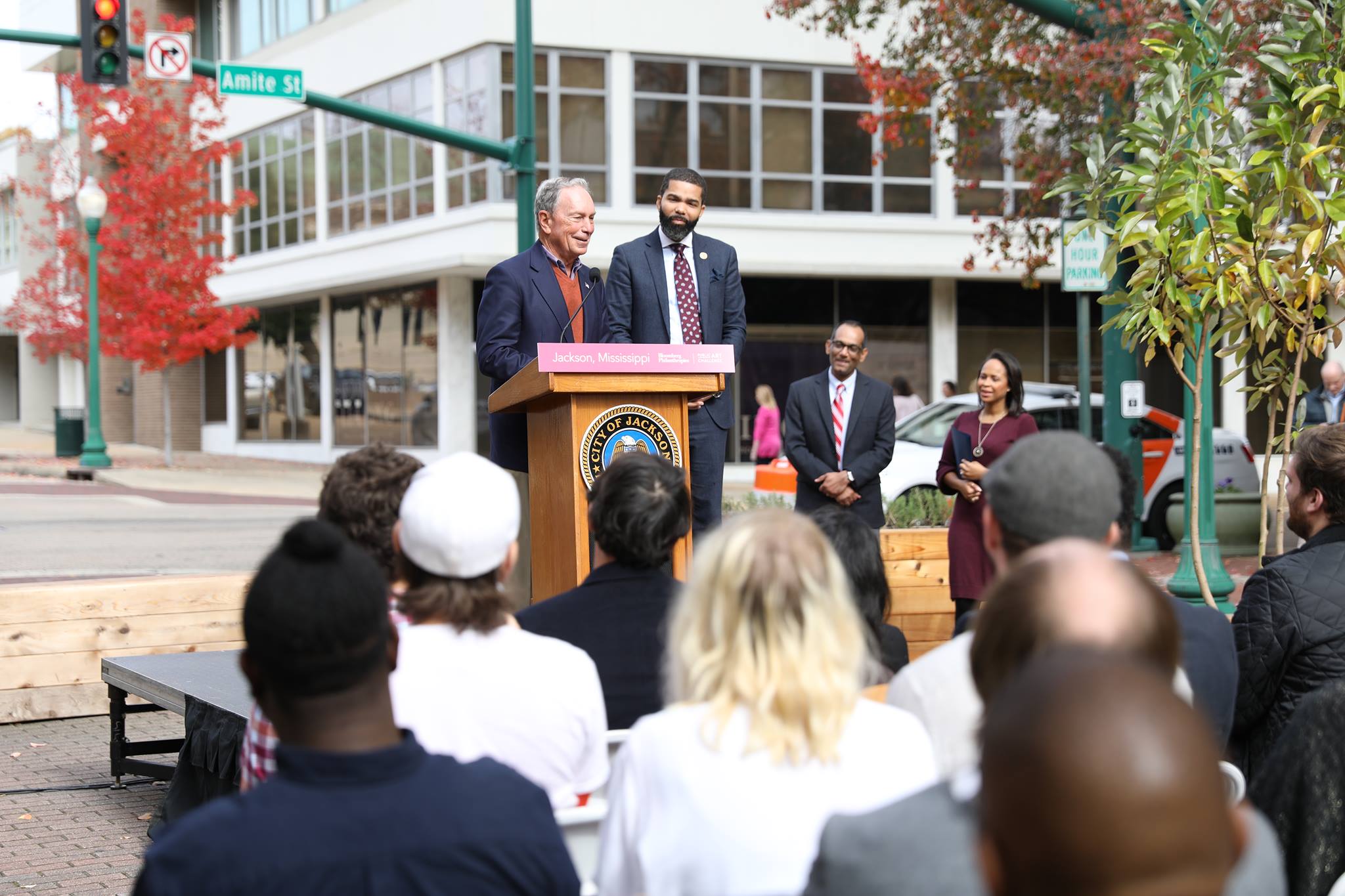 Jackson, MS – Today, philanthropist, public health advocate and former mayor of New York City, Michael R. Bloomberg joined Jackson Mayor Chokwe Lumumba to announce that the city has been named a Bloomberg Philanthropies 2018 Public Art Challenge winner. Jackson will receive up to $1 million for its project, “Fertile Ground: Inspiring Dialogue About Food Access,” which aims to inform policy related to nutrition by using art as a medium to communicate the complexities of the issue in the city.

An interdisciplinary team of local and national artists, landscape architects, filmmakers, farmers, chefs, nutritionists, and community members will come together to create a city-wide exhibition with installations, performances and programming. Workshops and panels will address challenges stemming from a proliferation of fast food restaurants in the area and the need for healthy food opportunities for the community.

Sites will include public streets, community gardens, a local elementary school, a vacant building that will be converted into exhibition space, and a food lab with pop up kitchen space that will act as an experimental food incubator.

Mike Bloomberg said, “This project, ‘Fertile Ground,’ will bring together artists from all walks of life to discuss barriers to healthy food in Jackson, Mississippi. Lack of access to healthy food is a challenge in many communities across the country, and this project is a great example of how local artists can help spur conversations around important issues.”

Mayor Lumumba said, “The city is overjoyed to have been selected in this process. This was a highly competitive grant where over 200 cities around the world applied to be a part of this Public Art Challenge. And so, to be able to aid in the aesthetic appeal of the city while delivering a message of healthy eating for the citizens of Jackson is a truly remarkable opportunity and we are ecstatic and look forward to seeing this project come into fruition.”

Partners will include local arts councils, community organizations, restaurants and cafes as well as the Jackson Medical Foundation, the W.K. Kellogg Foundation, Jackson State University and the Mississippi Museum of Art. Select national and local participants who will inform both the creative process and food related programming include:

Kara Walker, a nationally celebrated artist known for her exploration of race, stereotypes and gender throughout American history.

Adrienne Domnick, a local artist whose work is an exploration of sound, light, bold colors on a variety of surfaces. Through her work in Jackson’s Midtown community, Dominick leverages her creative perspective to bridge the gap between community and art.

Award winning filmmaker, director, and producer Keegan Kuhn, and local director and producer Roderick Red, who both work with nonprofits and focus on social issues.

Ron Finley, frustrated by his community’s lack of access to fresh, organic food, turned a parkway in front of his South Central Los Angeles home into an edible garden.  The experience blossomed into a quest to teach communities how to eat and take control of their food sources.

Walter Hood, a landscape architect, participating in the project said, “I am delighted to be collaborating with the ‘Fertile Ground Project’ and local community to create a lasting and sustainable sculptural work that is at once a powerful reminder of how landscape and food are symbiotic to our lives.”

For a list of all participating creative partners, downloadable images, and more information, click here for a media kit courtesy of the City of Jackson: https://bit.ly/2TvMaGF.  To keep up with the project updates please visit the Fertile Ground project page.

Photos from the press conference are available here: https://www.flickr.com/photos/mikebloomberg/.

About the Public Art Challenge:

More than 200 cities applied for the 2018 Public Art Challenge with proposals reflecting diverse artistic mediums addressed a range of pressing issues and social themes such as community development, environmental sustainability, cultural identity and immigration.  Fourteen finalists were announced in July.

Earlier this month, Anchorage, Alaska was the first city to be announced as a winner in the 2018 Public Art Challenge for “SEED Lab,” followed by Coral Springs in partnership with Parkland, Florida for “Inspiring Community Healing After Gun Violence: The Power of Art.” Additional winning cities will be announced in the coming weeks.

Submissions were evaluated on a number of factors, including their potential viability as dynamic public art projects, impact on civic issues, community engagement strategies, and capacity to establish or strengthen public-private partnerships.

Bloomberg Philanthropies has a proven track record of supporting creative and innovative public art. Over 400 cities have submitted proposals for consideration in the Public Art Challenge since 2014. The foundation’s inaugural Public Art Challenge catalyzed $13 million for local economies across the four winning regions and illuminated civic issues including economic decline, vacancy, water conservation and police-community relations.

More information about the Public Art Challenge can be found on

Bloomberg Philanthropies works in 480 cities in more than 120 countries around the world to ensure better, longer lives for the greatest number of people. The organization focuses on five key areas for creating lasting change: Arts, Education, Environment, Government Innovation, and Public Health. Bloomberg Philanthropies encompasses all of Michael R. Bloomberg’s charitable activities, including his foundation and his personal giving. In 2017, Bloomberg Philanthropies distributed $702 million. For more information, please visit www.bloomberg.org or follow us on Facebook, Instagram, Snapchat, and Twitter.