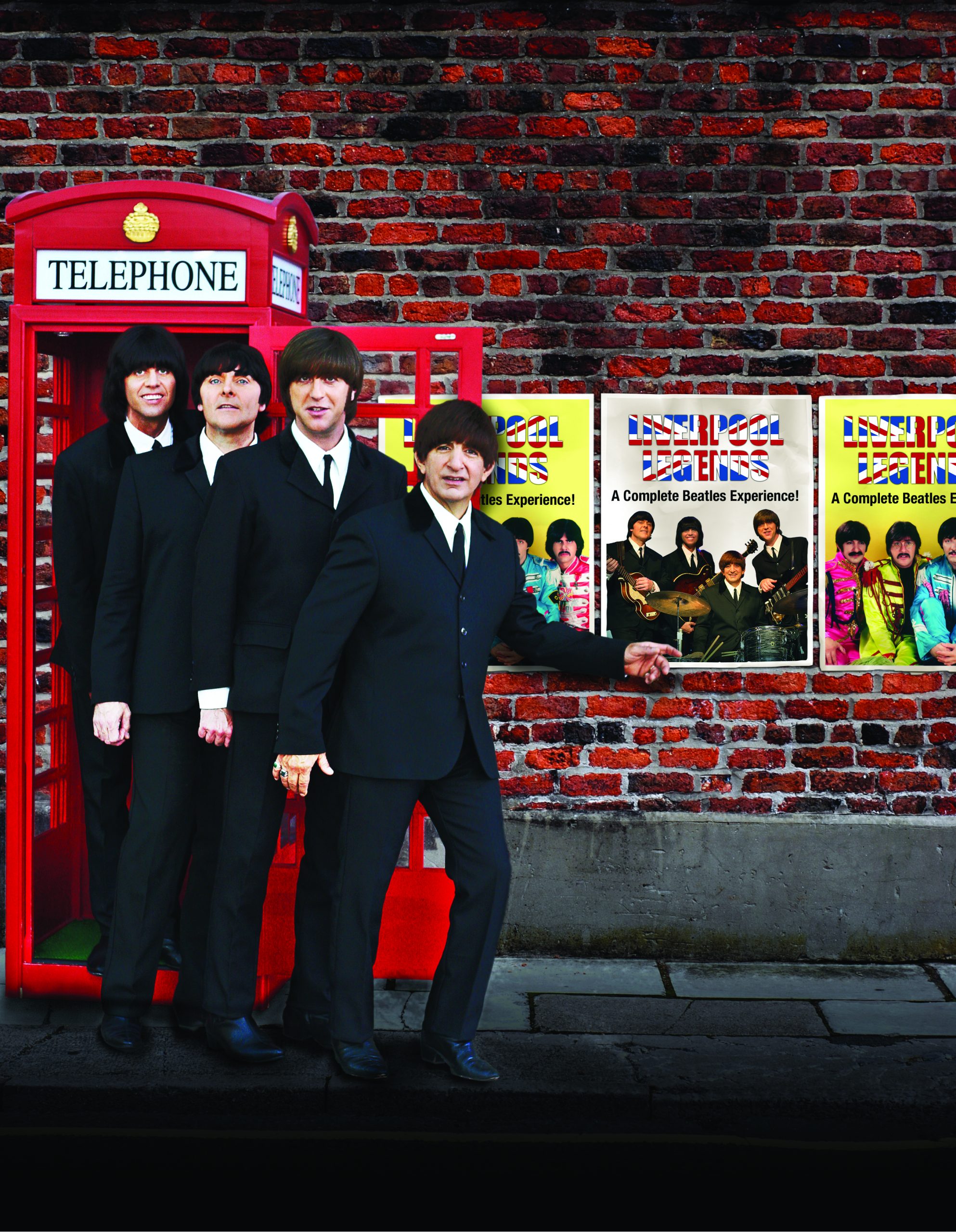 Liverpool Legends will make you feel like you’re watching the real thing!  These four lads will bring you “The Complete Beatles Experience.”
Buy tickets here!

Liverpool Legends perform songs spanning the entire career of the Classic Early Beatles through the psychedelic era of Sgt. Pepper and the final years all the way through Abbey Road, with precise attention to every musical detail, along with costume changes, vintage instruments, and special effects. Liverpool Legends will make you feel like you are watching the real thing! Together, these four lads will bring you “The Complete Beatles Experience.”

Louise’s involvement in Liverpool Legends makes them the ONLY Beatles Tribute Band with a direct family link to the original Fab Four. “Each member of the group is so close to the originals that I often feel like I’m transported back in time with the lads. These are exactly the kind of fun-loving quality musicians that my brother George would have loved to hang out with,” says Harrison.

Liverpool Legends along with Louise Harrison were nominated for a Grammy Award for their work on “Fab Fan Memories” – a Beatles Bond.

Many tribute acts recreate the sound and the harmonies of the Fab Four, but Liverpool Legends takes it one step further. All four band members have mastered the looks, mannerisms, and the thick Liverpool accent, that makes the experience totally authentic. In addition, Liverpool Legends seem to “possess” the personalities of John, George, Paul, and Ringo, which make the lighthearted banter with the audience irresistible!

Producer Steve Monistere comments, “If I could, I would change the name of this band to The Beatles. They are that spot on!”

Headlined at the prestigious Rose Bowl in Pasadena, CA, in front of 68,000. They are returning to the Rose Bowl this year for their 4th consecutive year! Liverpool Legends also received national attention when they re-created The Beatles famed 1966 concert at Busch Stadium in St. Louis.

Headlined at the world-famous Carnegie Hall in New York City where The Beatles performed in 1964 right after the Ed Sullivan Show.

Chosen over every other Beatles Tribute band in the world by top television and film producer Jerry Bruckheimer (CSI, Pirates of The Caribbean, National Treasure) to portray the Beatles.

Toured the world, playing in historic venues such as The Cavern Club in Liverpool and recorded at the famed Abbey Road Studios in London. They have performed with Denny Laine (co-founder of Wings with Paul McCartney), Pete Best (the original Beatles drummer) and the Boston Pops. Liverpool Legends have appeared on The Travel Channel’s “Beatlemania Britain” and headlined “International Beatles Week” in Liverpool where 100,000 Beatles fans jammed Victoria Street to hear them in concert.