May 13, 2022
City of Jackson to Host Summer Film Camp
Campers will participate in the production of an actual independent feature movie
(Jackson, Miss.) – Lights, camera, action!
The City of Jackson in the coming months will host its first-ever summer film, theater, and technology camp for Jackson youth. The Film Jackson Youth Summer Camp will introduce 20 students ages 13 to 18 to creative and technical workforce opportunities in the film industry. Campers will learn about all aspects of the filmmaking process from concept to premiere and participate in the production of an actual independent feature movie.
“This is a great opportunity to engage our youth into something constructive and positive,” said Mayor Chokwe Antar Lumumba. “We’re beginning to see the viability of the film industry in Mississippi and with that comes a great opportunity for our youth.”
Those interested in attending the camp can pick up an application at City Hall or apply online at www.jacksonms.gov/summer-camp-application/.
What:   Film Jackson Youth Summer Camp
Where: Smith Robertson Museum & Cultural Center
528 Bloom St., Jackson
When:  9 a.m. to 2 p.m. Monday – Friday (some Saturdays possible)
June 13 to July 8
Who:   20 Jackson youth ages 13 to 18
For more information, please call 601-960-4028. 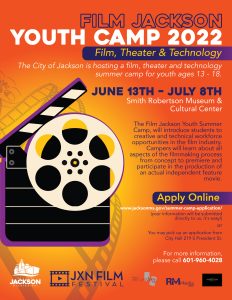